skip to main | skip to sidebar

Why Bill O’Reilly Should Boycott Minnesota

Christmas ‘warrior’ and triple ‘Polkbody’ award-winning ‘Paris Business Review’ Founder and Editor-in-Chief Bill O’Reilly declared July 7, 2009 as “a sad day for America” in his ‘Reality Check’ segment on the O’Reilly Factor because…. “Al Franken is now a U.S. senator”.

Why so sad? Well, “Franken is a blatantly dishonest individual, a far-left zealot who is not qualified to hold any office, a man who trafficked in hate on his failed Air radio program. With people like Franken on the Hill, this country is in deep trouble.”

“If you want proof,” said O’Reilly, “check out Page 96 in my book Culture Warrior.”

Of course O’Reilly could have provided his 'proof' right then and there on his show (or provide it on his website, or on FOX’s website, or in one of his syndicated columns, or on his radio show) but really, why should he just give his 'proof' away for free when he can sell it to you via his book? Or, you can just take his word for it---just like Bill himself does.

But anyway, whilst ’s innocent eyes brim with tears and its nose starts to run because Al Franken is now a Senator, Bill O’Reilly is no doubt looking for some way to cheer up—but how?

Maybe he could call for a boycott of Al Franken’s state of ? After all, as Bill told Heather Malick of the Toronto Globe and Mail whilst threatening with a boycott over two conscientious objectors to the Iraq War who had sought refuge over the border:

“…they’ve lost billions of dollars in , according to the Paris Business Review”

And if you want proof of that claim as well, well unfortunately the Paris Business Review doesn’t have a page 96 (or a page anything, as it was entirely a figment of Bill’s imagination) but you CAN check out his July 6 response to Jack Mathews’ June 28, 2004, New York Daily News column in which Mathews described O’Reilly as an ideological thug who plays fast and loose with the facts:

“First, Mathews writes that an O’Reilly Factor-led boycott if France did not economic damage to that country”, Bill harrumphs, before delivering a defiantly inert ‘no-spin’ O’Reilly Factor ‘fact’: “According to U.S. government figures, in the months following the boycott call, France did $138 million less business with the USA than it did the previous year.”

Of course France’s January and February figures (being the months in question) in the year before Bill’s Brie and baguette boycott even existed, were slightly worse----on account of the usual, utterly predictable annual drop in French exports to the U.S. every January and February since probably the American Revolution.

But the point is that Bill was able to 'prove' (after two months spent executing a two-second Google-search) that (notwithstanding the utter non-existence of the Paris Business Review) the fact remained that France had lost a number of ‘–illions’ (billions, millions, the actual word for the actual number isn't important) immediately AFTER his call for a boycott!

And the ‘fact’ that rabid bears hadn’t been admitted into the Boy Scouts to teach the homosexual agenda at the exact same time was just a bonus that Bill was simply too modest to mention.

And the only reason actually finished 2004 with a billion-dollar increase in its exports was undoubtedly only due to Bill signing-up for another tour in the War on Christmas (which by the way, he won, once again, as he does every year).

So if we are to learn anything from history (even though there’s obviously no point because, as George Bush essentially observed; ‘we’ll all be dead by then’) it is that a Bill O’Reilly-patented boycott of Minnesota (especially in the midst of a deep economic crisis) could be just the thing to put a non-liberal-fascist smiley face back on America’s down cast visage!!.

So wipe those tears from your eyes and the snot from your nose, you ‘little-guys’ of that Bill O’Reilly look’s-out-for from his non-elitist mansion!

Lift up your hearts and boycott Minnesota like you did France—because when the O’Reilly Factor ‘facts’ finally come in from the Minnesota Mercantile Bugle, you will be able to see the proof of your victorious stand against reality by buying Bill O’Reilly’s inevitable next best–selling book, on a page Bill himself will personally recommend to you—but only if you really need proof of course.

And then when Minnesotans hear Bill tells them what happened to their state’s economy, like did, they’ll think extra-hard about whom they choose to represent them next time!

Thanks for the read Pre Search 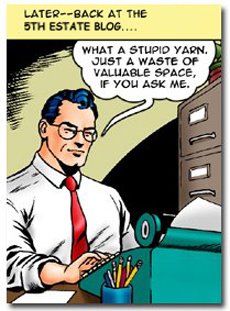